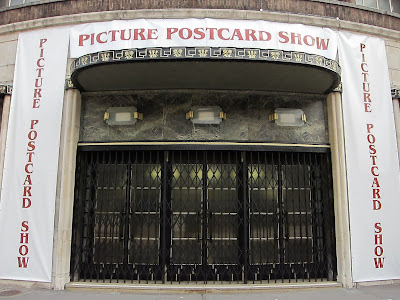 The London Picture Postcard Show 2011 is history. In addition, I am very sad to report, that the show as we know it, will NOT be taking place in 2012. Alternative plans to take the show into 2013 have been proposed and solutions are being sought. However, it is highly unlikely that the show will return to the Westminster venue. In the meantime the PTA has acquired and will produce, promote and maintain the twice yearly show in Woking which is approx. 20 miles from london center. More on Woking at the end of this post.

The annual meeting of the Postcard Traders Association (the PTA, the organization to which all stand holders at the fair must belong) is held on the Friday morning prior to the show's opening. Bringing the 9/2 meeting to order, the PTA president, Melanie Mordsley, read from her prepared notes. She announced that the organization, under financial duress, was regrettably canceling the 2012 show. Additional mitigating factor is the 2012 London Olympic games which will also host the Paralympics from the end of August to September 9th. These dates are inclusive of the annual postcard show's dates. 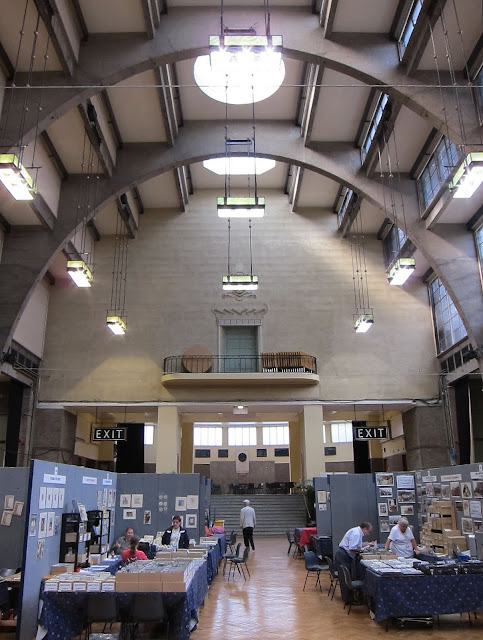 The main alley looking towards the front of the Royal Horticultural Society, Lawrence Hall located in a quiet residential neighborhood of Westminster. As a U.K. dealer put it to me years ago: "this a great space for plants, a lousy one for people and postcards", meaning: it can get very hot and humid inside the un-air conditioned space. Nonetheless, I will miss this exceptional art deco structure with its vaulted, skylit roof, resembling the bulkheads of an overturned ship.

Other impacts on the show (and all collectibles shows) for a number of years: the failing global economies; aging of the show going public and the dealers and the intrusion of the internet, eBay, Delcampe, et al, syphoning buyers away from shows to become stay-at-home shoppers. However the major impact on this venerable, 35 year old show has been the annual defections on the part of the "English" dealers from all corners of the United Kingdom who no longer support the show by taking stands.

As Melanie mentioned in her statement, and I paraphrase: "...without the support and involvement of the foreign dealers (21 dealers out of the 73 listed in the show program) the show would have folded years earlier." I and all the other dealers know this to be true. Part of becoming a stand holder was certainly to expand my business and be part of the annual "meeting" of dealers. However I must emphasize that I also wanted to support the annual London show, which was at one time, the best international show of its kind.

My thanks to all the hard work and the commitment made to produce and keep the show running by the PTA executive committee. Seen in the photo below are left to right: Derek Popplestone (recording secretary), Melanie Mordsley (chairperson) and Tony Stevens (treasurer). 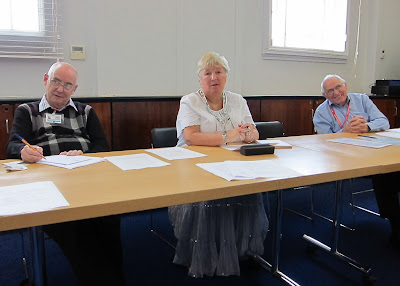 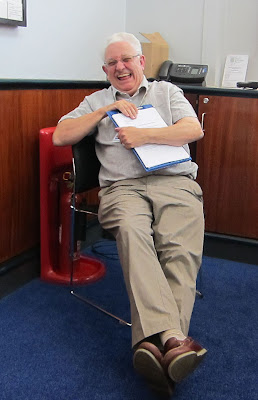 Above is the show chairman Dave Davis in a lighter moment at the annual meeting; why cry when you can laugh! Not pictured is Mike Huddy (honorary secretary).

Overall the show attendance was not bad, however many attending were not buying like they usually do, coming for the first few hours of the show and not returning. It appeared that the activity between dealers was also down. Tough to continue buying as you watch sales, especially for a show of this quality, drop. Additional photos from the show follow.

Post script March, 2012: The Lawrence Hall has now been sold/leased to the Westminster School by the Royal Horticultural Society and no further external shows of any kind will be held there. 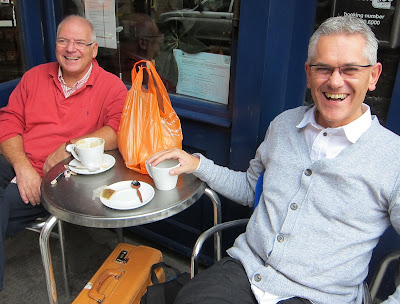 Fueling up prior to Friday morning's annual PTA meeting. Two dealers from Holland: on the left Ron deBijl, perennially known as "Ron from Holland" and Han Ruyters who is also a committee member of the PTA. 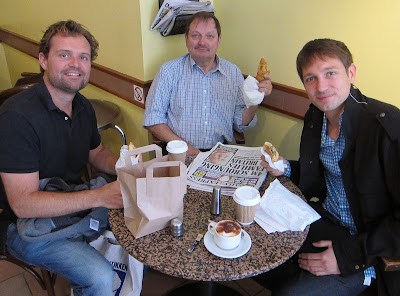 Also getting in a quick bite and coffee prior to the meeting are left to right: Justin, visiting the Krause family from his home in Australia; Jurgen Krause and his son Florian. The Krause's family from Berlin is completed by Jurgen's wife Christina and daughter Kathie. 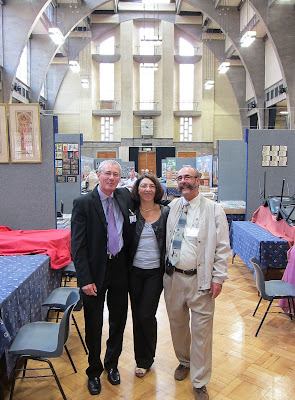 Part of the French "delegation" to the London show for many years, left to right; Marc Lefebvre and his wife Irene from Paris and Francis Gresse from the south of France. 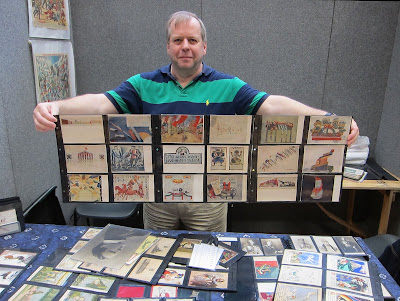 One of our comrades from the Russian Federation holding part of a rare set of Russian propaganda cards. 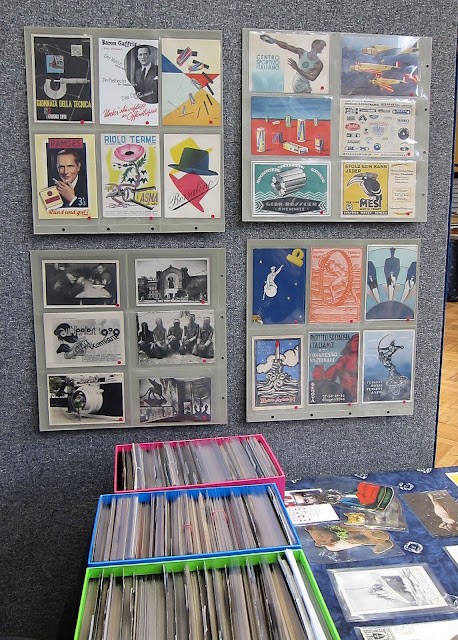 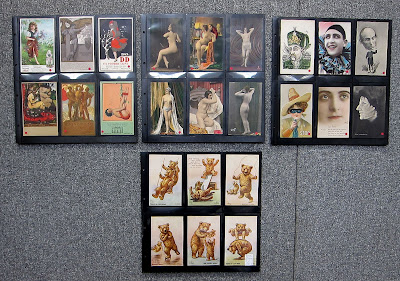 Two photos above and below: my stand showing the table and the wall displays.
Out of my three boxes prepared for London: hand-tinted nudes, surrealism, advertising, Italian futurism and propaganda, mechanicals and hand-mades as well rare teddy bears, Titanic, krampus and much more. 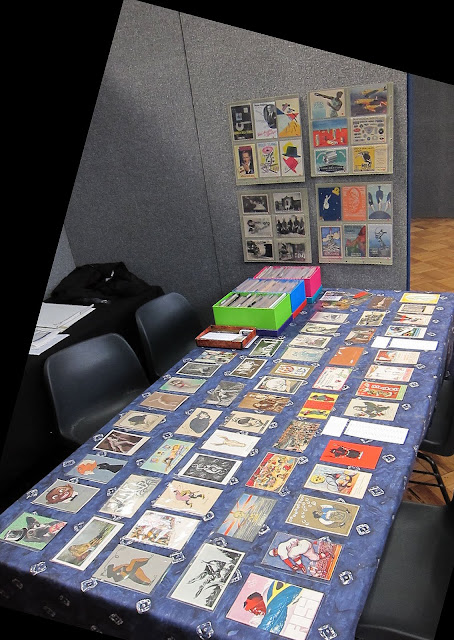 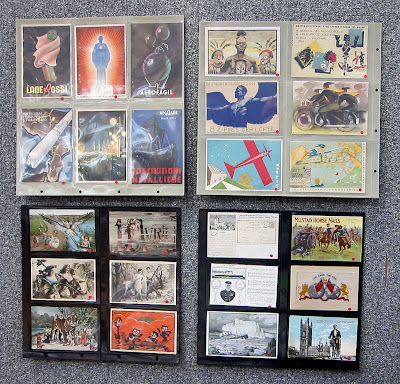 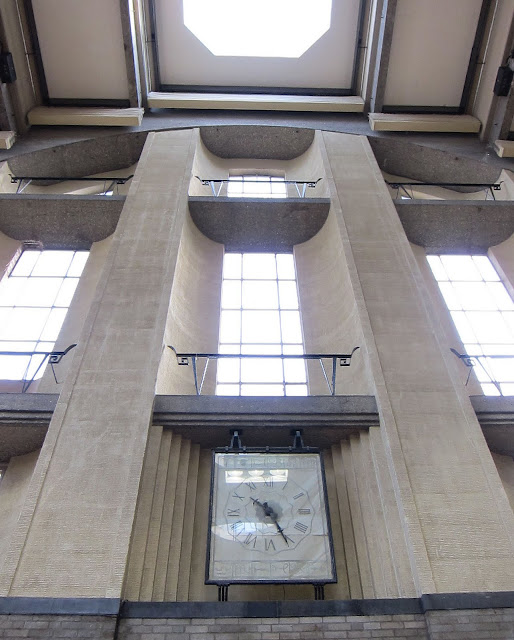 Beautifully designed concrete forms surround the vintage clock. "The little hand is on the ten and the big hand..." (Dave Davis). 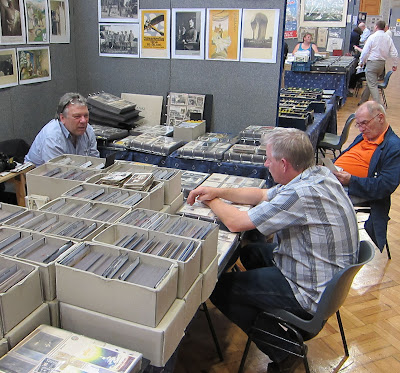 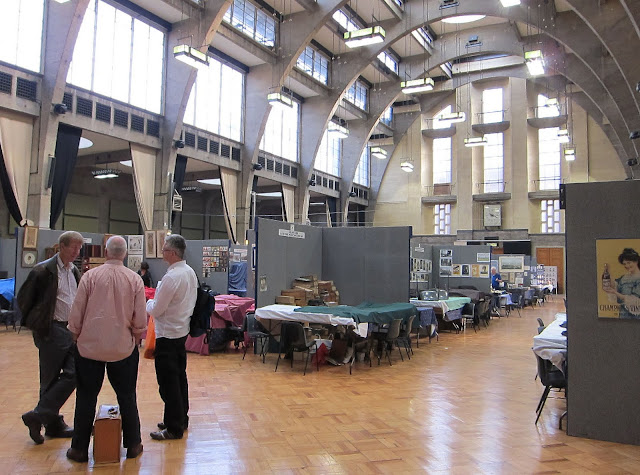 Full view of the exhibition space prior to opening on Friday morning. 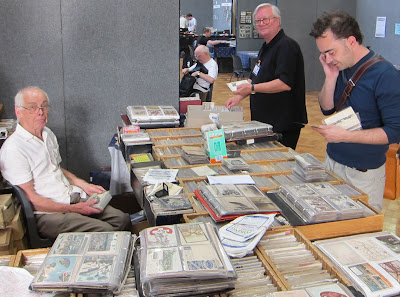 Julian Dunn on the left and Danish dealer and PTA committee member Palle Petersen in the center. 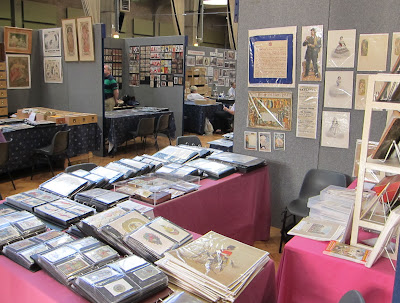 Alternative to the annual London Show

The twice annual Woking show operating privately was taken over by the PTA earlier this year. The PTA will promote, maintain and produce the Woking show going forward with the hopes of turning a profit and adding funds to the depleted PTA treasury. The show is in September and May; go the the PTA site for details.
Posted by Joseph Vasta at 12:03 AM