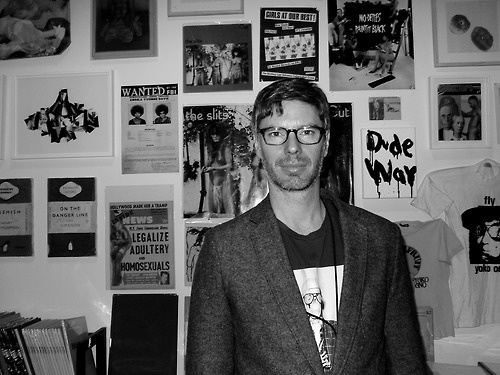 This past Saturday evening I received an email linked to a story about the untimely, tragic death of John McWhinnie. My condolences to his wife Maria, his family and friends as well as his associates and colleagues at the Glenn Horowitz company.
The first notice on the web of John's death is here at easthampton.patch.com. I suggest reading the comments following the story as well. There is an obituary from the 1/10/12 Sun Journal, a local Maine newspaper, here and an interview with John on Peter Sutherland's website that says so much about who he was and how he arrived in the book trade. There is also an obituary at the New York Times online.
I was very fond of John and felt a strong connection with him via our shared interests in books, photographs and periodicals and all things related to the demi-monde. He had a tremendous capacity to situate material across wide spectrums of time, style and context, making for superb presentations at book fairs, gallery exhibitions or his website. John's Cool, Cooler, NFW page helps define his approach and presentation of unusual juxtapositions.
It is an extremely sad and gut-wrenching beginning to the new year for anyone who knew John. He was indeed a very cool, uniquely gifted person who is already, seriously missed.


Update 1/17: A non-denominational memorial service will be held for John on January 19th from 10:30am to 12:30pm at the Brotherhood Synagogue, 28 Gramercy Park South (20th Street between Irving & Third).