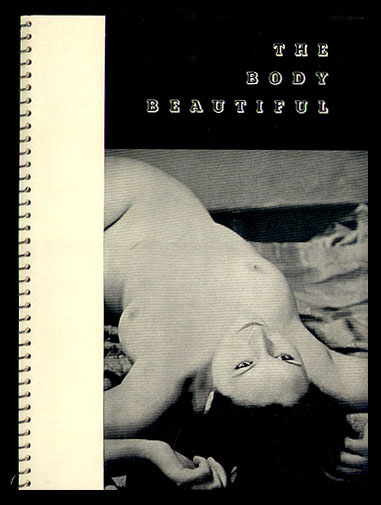 The contribution made by Americans to the bibliography on the body, its form and figure in photography, is almost non-existent until the 1930s when a number of small "art photography" publishers begin to explore the genre. Without precedent in the US, the Dodge Publishing Company in New York City, set an extremely high standard in 1935 with the first of its five volume series, THE BODY BEAUTIFUL. Above, the cover of volume one.


In retrospect, only a few American books on the subject of the nude would ever come close to the quality of this five volume set published from 1935 to 1939. These spiral bound collections of nudes were beautifully printed in fine gravure and rivaling the quality of production, typography and page design as well as compositional experimentation as some of the noteworthy European publications of this period.  Daniel Masclet’s NUS La Beaute de la Femme and the PHOTOGRAPHIE Annuals published by Arts et Metiers Graphique in Paris may have inspired the editor of the series, Heywood Campbell, and his designers. 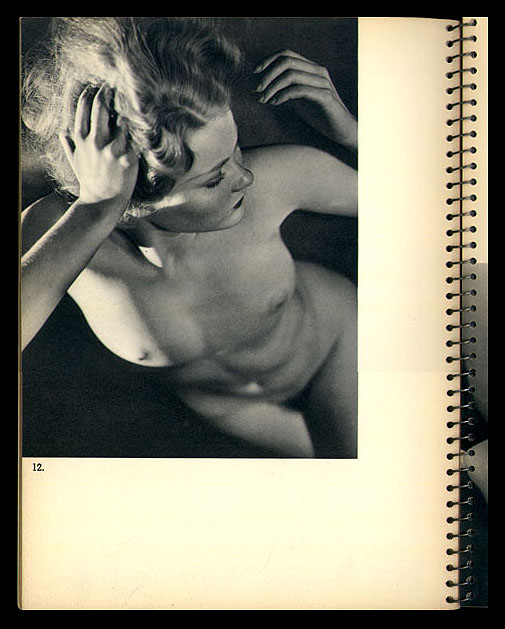 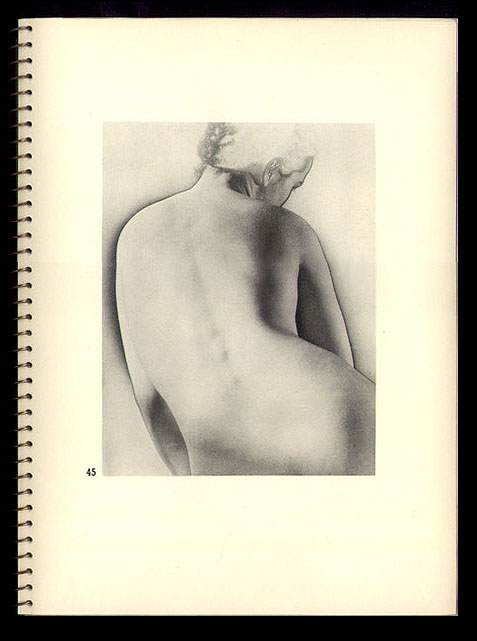 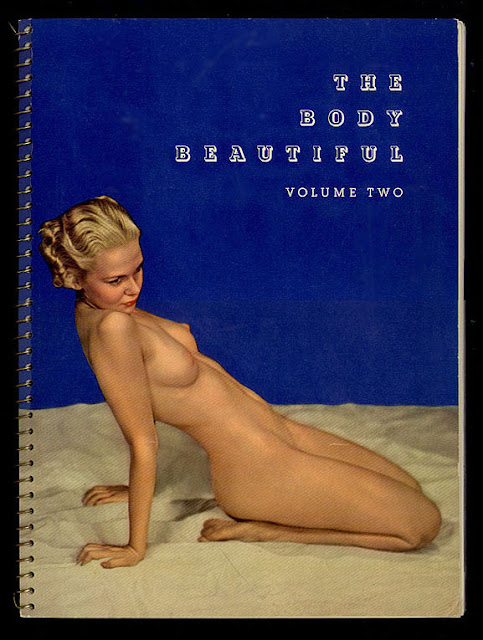 
The overall size 8.75" x 11.75"; each volume published in a box with die-cut top revealing a portion of the cover photograph. These exceptional books are rarely seen, especially as a complete set and in such fine condition as those shown in this post. 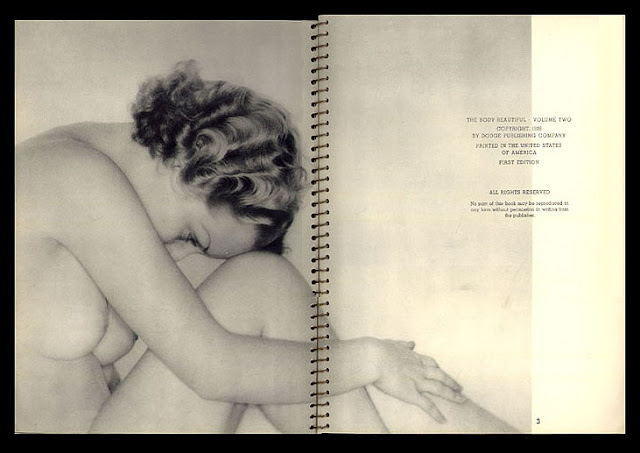 Exceptional use of the two-page spread incorporating the spiral binding; photograph shifted to the left edge to create a white band on the right side as a design element. Note placement of the copy and the page number. 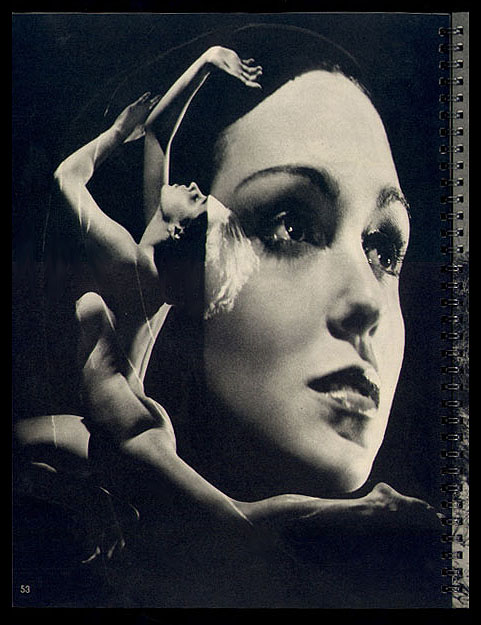 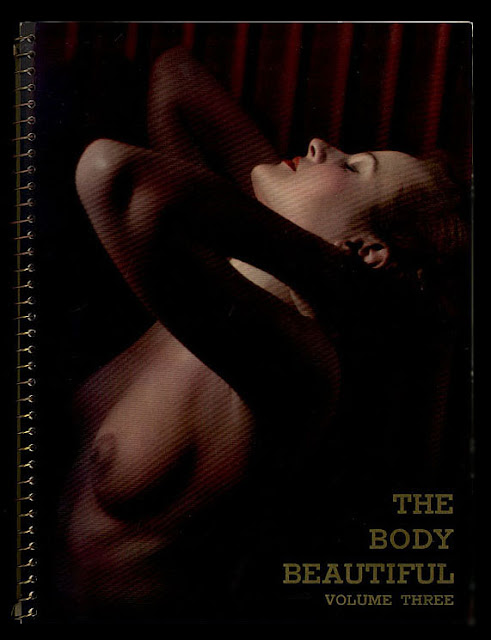 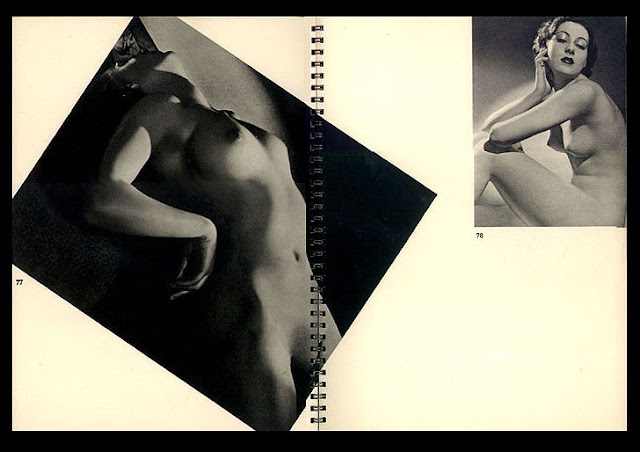 Literally tipping the photograph on edge, creating a dynamic of blacks on white  in contrast to the smaller image "forced" into the upper right corner with bleeds on two sides. Note the effectiveness of the spiral binding as part of the layout. 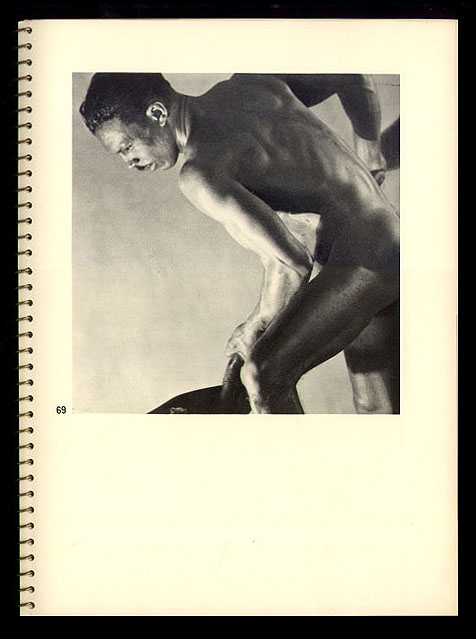 One of the few male nudes in the series. 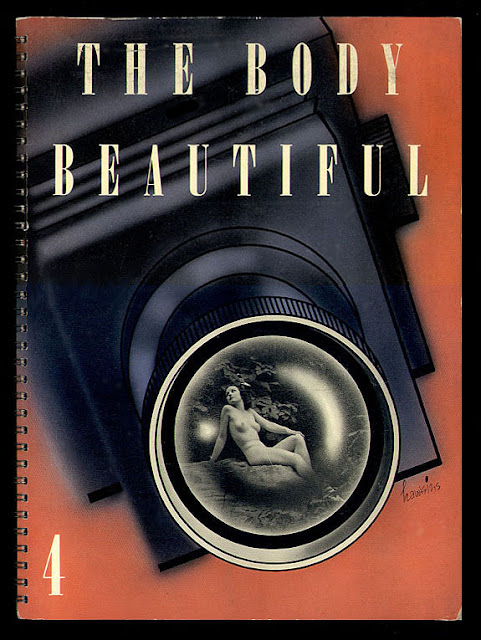 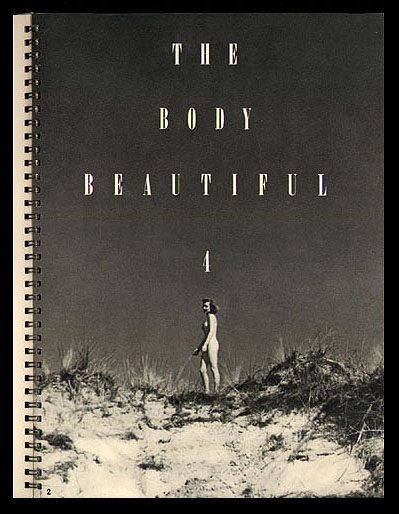 Simple, expansive image used as the title page for volume four with the typography centered over the nude figure. Letter and word spacing fits
nicely with the volume of the photograph. 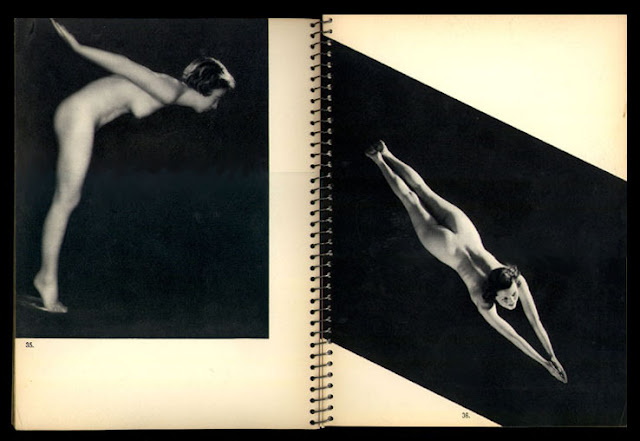 Implying the motion of a dive. The black and white spaces and the sharp angles of the photo on the right create a brilliant spread. Once again the spiral binding is used as a design device. 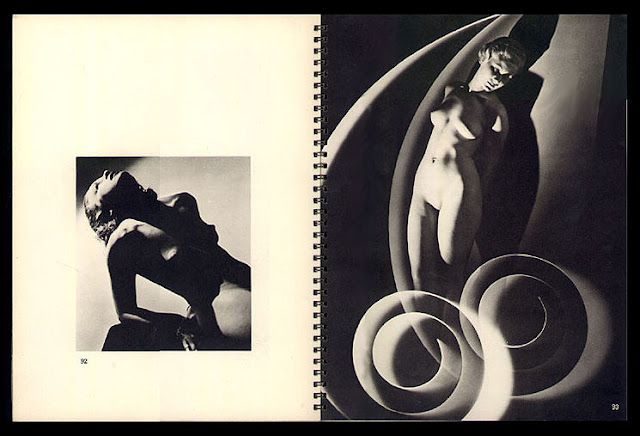 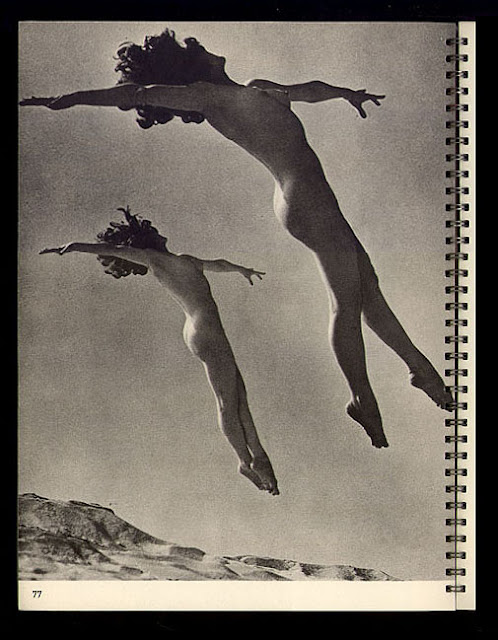 Nude dancers, flying. Inspired by Riebicke or Munkacsi or both. 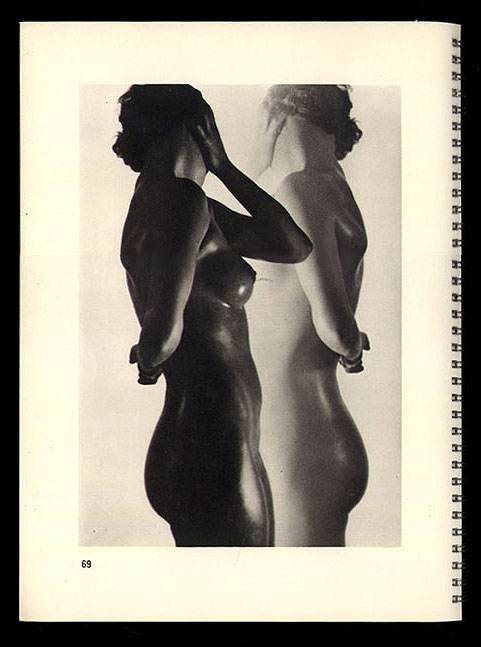 Photograph by Heinz Hajek-Halke. Superb montage of the same image: one reversed and placed over the other creating a "black" and a "white" image. 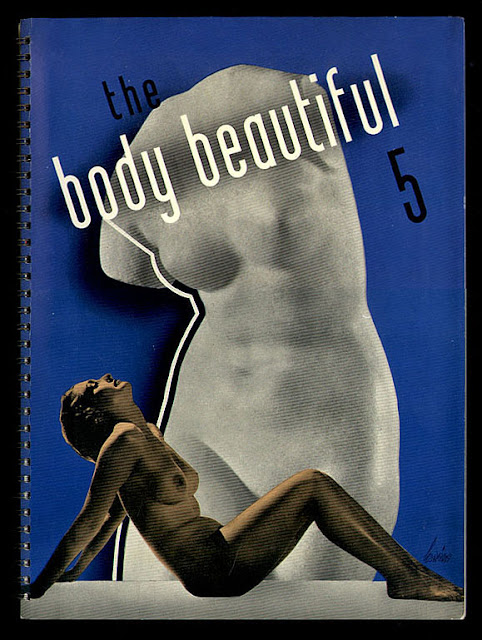 Another exceptional cover design of montaged images by Hawkins. 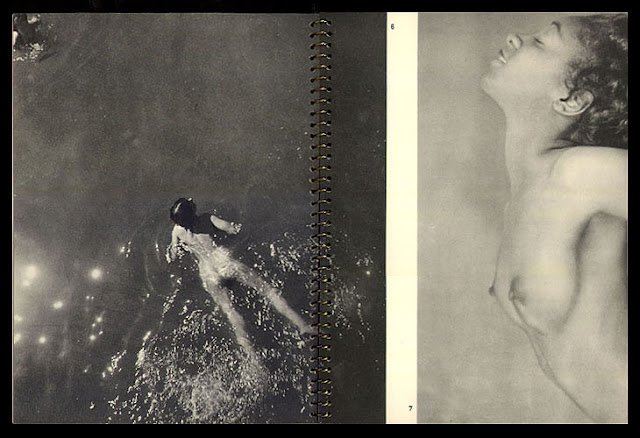 Ignoring and crossing the "centerline" to create a square, bleed image in a rectangular world. The white space and tall rectangular image is quite unusual page design as well. 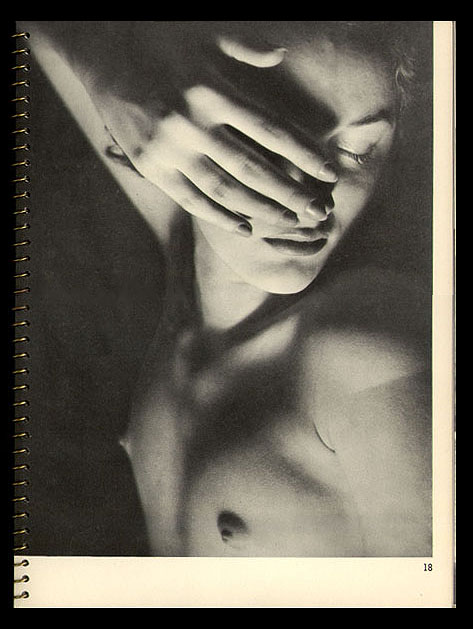 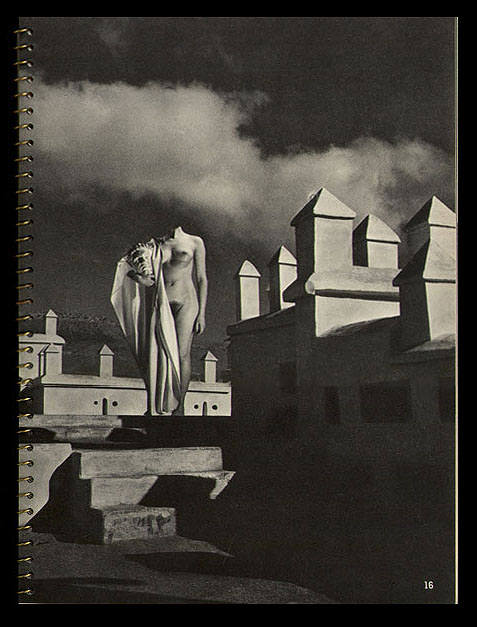