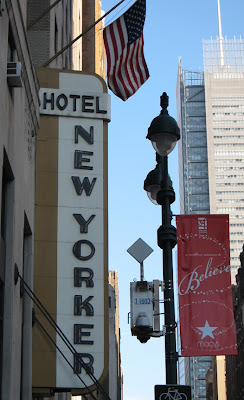 The November 2011 NYC Postcard show is history as dealers and collectors descended on The New Yorker Hotel this past weekend. The New Yorker, at 34th Street and 8th Avenue has been the home for the New York Postcard show for about fifteen years. The hotel rooms and services have been improving with time and the involvement of a nationwide, hotel "group" since 2000, triggering room and lobby renovations to welcome reviews. 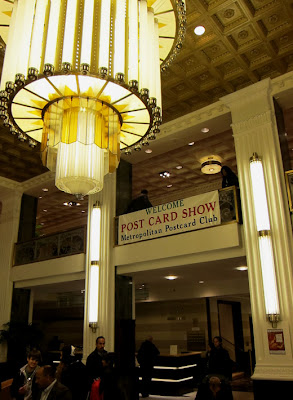 Lobby entrance area showing the mezzanine level and show banner. The hotel is conveniently located two blocks from Penn Station; eight blocks from the Port Authority Bus Terminal; ten blocks from Times Square; is the departure point for the Bolt Bus to Boston and is at a major intersection of numerous city bus and subway lines. All the private and public transportation available within walking distance makes the New York City show one of the easiest to reach! 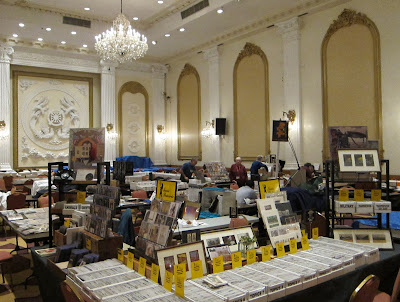 As a result of dealer attrition and economic demands, the show is now located in only one of the ballrooms and the foyer area leading into it. A note to all dealers and collectors: the New York City Postcard Show needs your participation!! View of my table. Although this show has been impacted, similar to other collectible shows, by fewer exhibiting dealers and diminishing attendance numbers, it still remains a viable show, especially for dealers presenting new material for their clients. 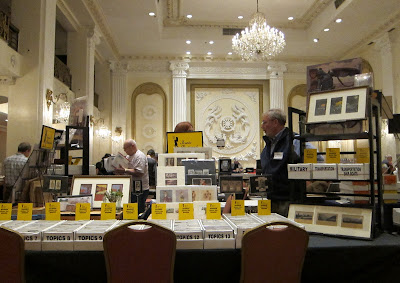 Across from my table, the display of Iconic Postcards. 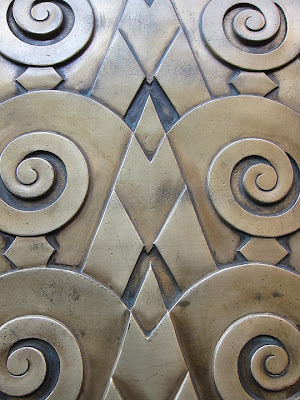 Two of the remaining art deco icons found at the New Yorker, opened in 1929. Detail (above) of the brass decorative elements surrounding the long gone entrance to a  Manufacturers Trust Company bank (iterations that followed: Manufacturers Hanover > Chemical Bank > Chase Bank > JPMorgan Chase) and (below) the exceptional, detailed ceiling and (a view looking up under) the huge chandelier in the main lobby area. 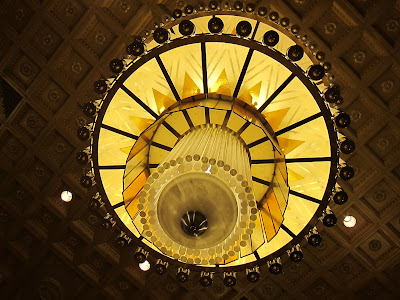