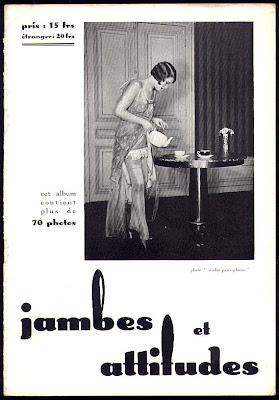 At the end of the 1920s, the first periodicals dedicated to a special interest or "fetish" were published in Paris in the form of the "jambes" (legs) series. There were different magazines from two different publishers. The first, show here in the top three illustrations, was Jambes et Attitudes (Legs and Attitudes) published in Paris, circa 1929/1930 by Paris-Photo. It was 32 pages with 70 photographs all credited to Studio Paris-Photo.

The photographs appeared totally new and fresh at the time in comparison to everything else risque in nature, titillating the imagination by not revealing too much. It was all a tease, focusing on glimpses of legs and lingerie as the result of a chance "upskirt" view. 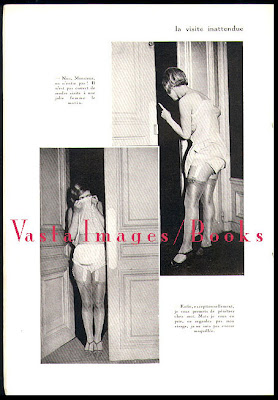 These accidental moments of "flashing" were captured on film by the ever ready staff photographers at the Paris-Photo studio. The results, while appearing posed and hardly accidental, have a fresh and somewhat shocking quality to them, especially considering that nothing like these photographs had been previously published.

See J&A in my eBay store.

Although the actual photographer(s) were never identified beyond the Studio Paris-Photo byline, there was an additional significant contribution by them via postcard size images. Most were posed outdoors and featured cloche hatted flappers raising there skirts, exposing lingerie, silk stockings, garter belts and high heels. 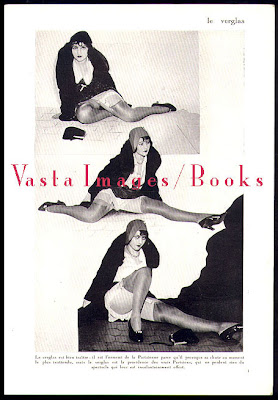 Invariably, the cloche hatted lovelies "caught" by the Studio Paris-Photo cameras, are seen in awkward moments: up a ladder, falling to the floor, skirt flying up; camera peeking up from under her secretary's desk, and the like. The results: a voyeur's fantasy showing bits of lingerie, stocking tops and legs.

In the 1960s American publishers of "men's" periodicals created the "speciality" magazine. Find out what your buyers want (i.e garters & stockings), get photographers to shoot it, then publish a magazines titled Leg Language, Black Silk Stockings, Garter Parade and the audience of buyers is captivated. Seems academic today, but in 1920s Paris it was a whole new thing, quite unassuming and quite wonderful. 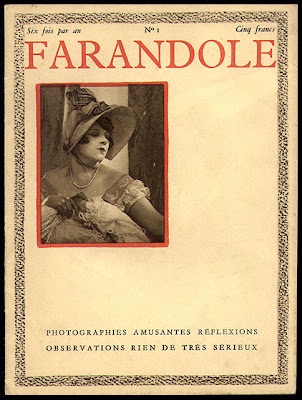 At the same time, in the same city, another leg fetishist and voyeur was at work creating images for his new publishing concern Les Deux Tourelles (the Two Towers). His name was Albert Wyndham.


Using both the Wyndham byline and that of the Film Art Studio, he had previously  published beautifully toned, real photo postcards in the mid-1920s. He was obsessed with the same types of models: seductive young flappers with marvelous figures showing off their stocking tops, legs and high heels, nothing more. He never showed any nudity in the postcards and only later, in his publications, did he begin to undress his models. 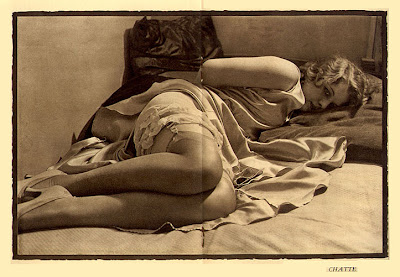 In 1930 he published magazines also using "Jambes" in the titles. The magazines were not only seductive but beautifully printed as he opted for quality, toned gravure impressions on unusual "art paper". Here is the cover and centerspread of Farandole, a one-shot confection, circa 1931.