The Folies Bergere music-hall, located in Paris on the rue Bergere, is a world famous venue attracting travelers and tourists for decades dating back to its original incarnation in 1869. The Folies Bergere is  known for the incredible "spectacles" created during the 1920s and '30s under the direction of Paul Derval, where Josephine Baker became an overnight sensation, circa 1925.


In circa 1923 the Folies began publishing lavishly produced souvenir programs. Each program was dedicated to one full season showing all the primarily performers in costume and all the staged "spectacles", some as colorized, two page spreads. 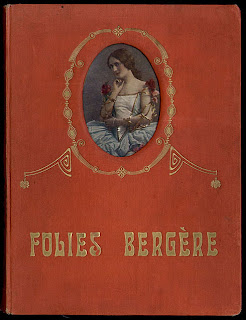 The programs for pre-occupied Paris were published until 1938. The thousands of photographs appearing in the programs were, amazing, all credited to a single photographer, Walery and his Paris Art Studio. I will soon post separate blogs for both Walery and Josephine Baker.

Two top illustrations are both hardcover volumes with the first nine Folies programs, circa 1923 ~ circa 1931, together with the original covers bound-in. These bound volumes were presented by Paul Derval to distinguished guests and friends of the Folies. The volume in red covers was bound in Czechoslovakia. 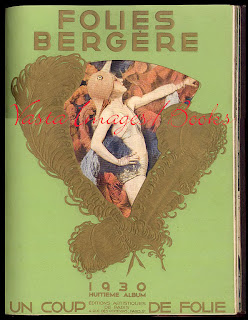 Program for 1930. Une Coup de Folie.
Each program cover was die-cut to reveal a part of the colorized photograph on the first page. The black and white was "colorized" by the printer to recreate how the photograph might appear in color. Not until 35mm color film for motion pictures was spooled for the Leica camera, in 1937, was true color (transparency) photography possible. 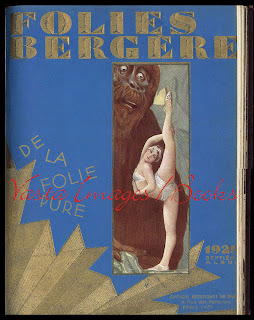 Program for 1929. De La Folie Pure.
Note the pre-King Kong image of beauty and the beast! 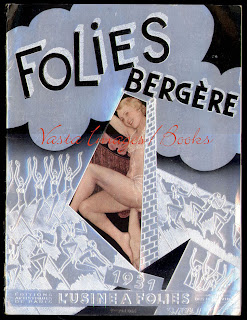